But can't help but note that when I saw that my computer has been on for about 8 hours and recalled that I turned it one when I got home and it was just half past noon. Just saying.

And it has been a productive Saturday so far. Laundry done. Weekend soba lunch with lots and lots and lots of shredded ginger into the dipping sauce. This afternoon some grocery shopping, detritus of life sorting.

For tomorrow a film featuring life and music of James Booker, New Orleanian extraordinaire. If only I can keep the wolves of work at bay until Monday.

"Showing in New York on Sunday and Monday."


Yeah, keep in touch. (private joke).
Of the last 36 hours I spent 28 at work. 2 on the subway. 1.5 hour for dinner tonight. Now see if I can stay awake through the sig other netflix choice long enough to go to sleep at usual time and not mess up my sleep cycle.
Oh, I neglected to mention that my convivial mood is no doubt in part due to the purchase and consumption of some Sombra Mezcal. Yeah, it's some foodies who guide it from Oaxaca to the shelves in the US. But it's ok so far.
I should have foregone learning the bits of SQL and other Microsoft Window clutter that fills my work day and concentrated on getting a food gig. Alas too late. But I still try to enjoy my meals.

Today a lunch of "regular beans" (my term, didn't quite catch how they described it) i.e. pinto, rice and braise fish at one of my favorite things about going to 8th Ave & 14th Street area: Taza do Oro. Ended the meal with una taza de expresso. $10 (tip included) and I'm back out on the streets, one happy camper. I could try to describe the fish but I would be guessing and just have to say that it was good, a boneless white fish filet with tomato based sauce and you can try for yourself some Thursday.

And then dinner. At home. I made it. Basic. Steamed some leak/cabbage/pork Chinese dumplings, which were eaten dipped in rice vinegar/soy sauce/spice Chinese mustard. Made miso shiru with hokusai cabbage and little brown mushrooms bought at the Korean store. Savored with an English Ale bought at a discount liquor store near the Newport NJ mall next to where I had a job today: Theakston "Old Peculier" which made the Roger Protz of CAMRA (Campaign for Real Ale) fame's book: "300 BEERS TO TRY BEFORE YOU DIE!" in the "Old Ales" chapter with the comment of "...widely exported, to the US in particular." Which may be pun intended as the explanation of name of the beer is that it is derived from establishment of a special parish in the 12th century and that "peculier" in that context came from Norman-French word meaning "particular".

Anyway, glad it is widely exported to the US in particular since it is smooth tasty dark ale, which while dark and creamy, not as heavy as a porter like Guinness, so could easily imagining quaffing several in an evening repast.

OK, time to wash dishes and get back to work.
not a creature was stirring, not even a mouse. Oh, damn, goddamn roaches!


Checked the 'OZ web site in preparation for listening to tonight's concert broadcast and find that "due to technical difficulties" (dang, that phrase used to irritate the devil out of me) they will record but not broadcast until Wednesday at 4PM.

I'll be at work at that time. Boo, hisssss!

So, enjoy, those who get to go tonight!
I don't often hustle people to listen to WWOZ.org on the web, I figure that anyone I know that cares about that corner of the music world will already know all about that.

But maybe you might not have noticed that WWOZ and the Jazz and Heritage Foundation will be presenting one of the pillars of modern Afro-Latin jazz, Cuban (yes, he still lives there), Chucho Valdes. It is a free concert, so go if you in NOLA.


And listen via radio or the web if you can't go.

Checking his web site I see that he is on a fairly extensive US tour and will be at Carnegie Hall at the beginning of December but you know, New Orleans and all that with its history of twice a day ferry to Havana and bands playing in both places during the teens and twenties of the previous century...
Work off and on from 9AM to 3PM. Customer trying to get power back to servers in their datacenter right on the west bank of the Hudson River. Some up, the rest sometime before Monday. Will check back with them on Sunday.

So then to office to check if wife's eye medicine shipment arrived at our warehouse. It has not arrived. It supposedly shipped Friday before the storm, and usually arrives in 3 to 4 days, but now, who knows. We are in process of moving out of the warehouse. I have a computer and some odds and ends still there. Packed them but don't yet know if I am bringing them to the new office where I have much less space or to home where I do already have a little pile of work stuff. After 5 meet wife on 34th for dinner.

I tried to convince wife to go to my regular place in 32nd street little Korea but she wasn't in mood to be flexible from her basic criteria for choice of Saturday night dinner: beer, not spicy, dessert, decent bathroom where she can brush her teeth. So we ended up at O'Reilly's pub on 31th between Broadway and 6th. Dingy look outside, nice bright cozy place inside. Seared tuna and mash for entree, onion soup, salad and a few Smithwicks later we finished with "Irish apple pie" which seems like regular store bought apple pie, heated and placed on top of chocolate lined plate. Tea for her, Irish coffee for me. I think next time she might get Irish coffee herself.

Train ride home was pppppppp painful. No clear announcements about train departures from 34th street which is current origination point for only uptown trains going to Queens. As we were walking along one train, the doors suddenly closed without announcement or signal tone and left us standing there. We went to another platform where a train was waiting to go uptown but it turned out that two other trains came into the station and left before our choice did. No announcement understandable by lay persons (track 2b cleared, blah blah) and no one on platform giving information to passengers. By the time we got to our stop in Queens my bladder was exploding and so after 12 years in the neighborhood I finally got to see what the 74th/Roosevelt subway station bathroom looked like. Small and dirty, what else would it be like? But at least I was spry enough getting of the train and to the loo that I didn't have to dance in place in line. What a relief and then a stop at the grocery store for some basics, and now the end of the day.

We have electricity, we have heat, my feet are dry. Lots of people not very far from me, a few that I know and will be seeing at work on Monday or later cannot say the same.
As usual while I am somewhere I feel like I am taking too many photos and then get back and lament that I took too few and didn't get something that thinking back I wish I had.

Eventually what I took will be up on my FLICKR account. For now, since I want to make a post to note the end of the trip, after quick glance at most of them, I pick these two from my visit at the Yasukuni Jinja, the shrine that sometimes gets into the news whenever Korea or China is acting up over past grievances and anger over their past with Japan, particularly in regard to WWII. I don't know if I will ever be able to fully express/share what I experienced at the shrine and the accompanying museum but to keep it simple I will note that this is where modern Japan honors their dead soldiers.

One photo is at the beginning of the day, when I arrived about 30 minutes after opening time. The entry road is totally filled with buses from tour companies. I took the photo standing on a low, maybe 1 meter, wall by a refreshment stand that is right before getting to the inner gate to the court yard of the shrine. Half way back you can see a statue that is roughly in the middle of the entry road. The two horizontal gray lines just behind the statue are the top part of the Japanese ceremonial entry gate, the torii that is at the beginning of the road. It is as far back behind the statue as the distance from where I was taking the picture is to the statue.

The other photo is taken from the beginning of the entry road at the end of the day, near the closing time of 5:30PM. Again can see the statue that is the mid-point. Again at the far end of the road you can see a torii, this time one that marks the inner entry to the shrine. I was standing about 10 meters, 20 some odd feet, in front of the torii that can just barely seen in the photo I made earlier.

So from the scale of the entry road and the fact that it was completely filled with tour buses at the beginning of the day, it can clearly be seen that this is significant destination for Japanese. I went on Monday October 1, which although is a work day, also there is some activity honoring the dead on the first of each month. That activity is not open to the general public, at least not to someone who just shows up. The public spaces and museum were active but many if not most of the people who came on those chartered buses were participating in private memorial services. I could hear flutes, drums and chants/prayers when standing near the shrine. I saw lines of people passing inside the shrine along a wooden fence that just barely allowed me to make out the shadows of the people passing by.

What I saw in the museum was amazing (no photos allowed except for of a couple of pieces in the museum entry hall). Gave me some insight into the warrior culture that carried Japan from the Meiji restoration through to WWII as Japan came to grips with "modernizing" to avoid the Euro-colonialization that touched pretty much all the world.

There are books written about all this, so I'll stop this proto-prologue. 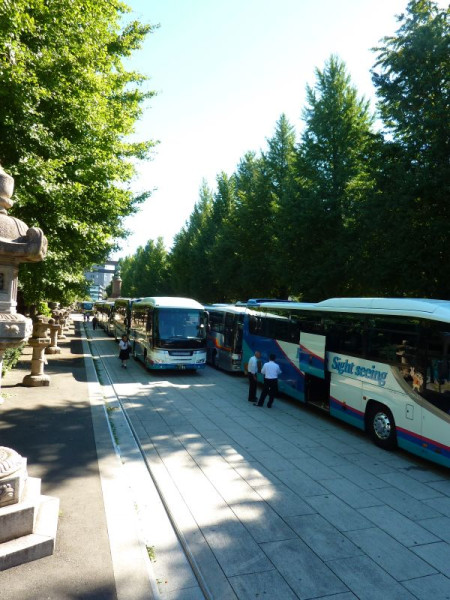 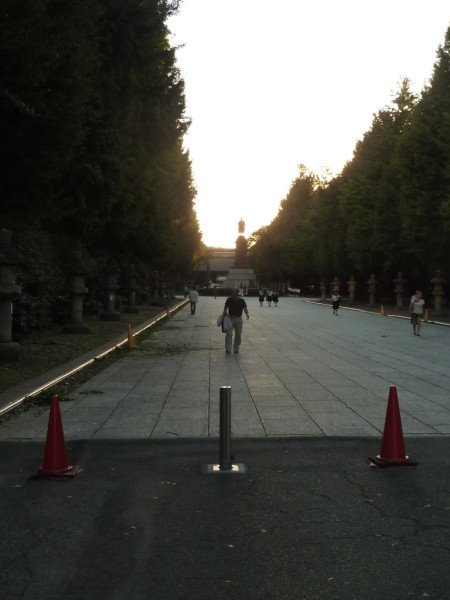 Crap. Back to work tomorrow. Gotta pay rent, yo. Oh, by the way, this is how i got drunk. A double shot of the hard stuff and a bottle of the beer product with has almost no alcohol. Turns out not a good plan. Just woke up and now 2PM. Should be on a train to Fukushima already. Taihen da! taihen da!
Collapse