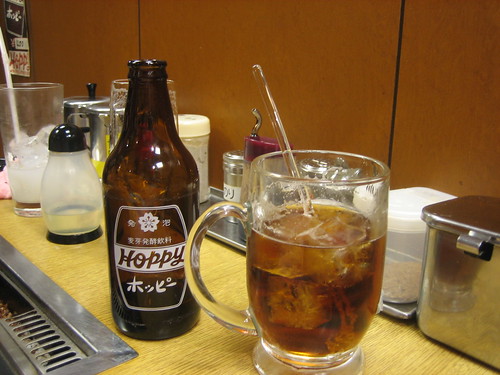 When recently in Japan I tried and really liked Hoppy. I had seen a retro poster in a restaurant and decided it looked interesting and to try it. Turned out that Hoppy is a low alcohol malt drink that was first made in Japan in about 1948. Faster and cheaper than beer to make, it is made alcoholic by mixing it with a shot or two of shochu, Asian vodka. Today went to Hagi, the Japanese bar/restaurant on 49th street between 6th and 7th avenue. On the way to Hagi the subject of Hoppy came up and my friend said maybe they will have it. Naw, naw I poohed poohed, it isn't available in Japan out side of the Tokyo metropolitan area so why would it be found in NYC, then again, that's the sort of thing tha makes living in NYC worth paying the rent. Of course, since I am writing about it you know that they had it. 3 hoppy sets later I am feeling no pain. Almost good enough to recover from the near constant work from Saturday to tonight because of the time change. Yes.