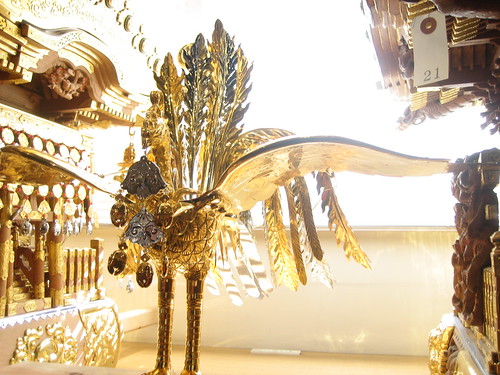 Today makes 1 week in Japan. I would totally fail as a power tourist, doing barely 2 things a day. I totally fail as a food diariest. Last night went to Okinawa style place and all the food was either excellent or very interesting and I only photographed 3 out of near a dozen dishes. Highest score on the interesting list was the dish that I thought was perhaps a type of jelly fish that had been citrusy marinaded and it turned out to be pig's ear cut in little 1/4 inch by 2 inch shreds. The "new comfort food" category was taken by some purplish cassava / imo / potato that was mashed with little tiny squares of what might have been mushroom and I swear it was cooked with lard or pork but my daughter (who has been to Okinawa twice and was acting as our menu guide) swears that no meat or meat product was involved. I will research that one later.

The phoenix was on display in a store that sells Japanese festival supplies: drums, clothing, flutes, and shrine objects for parading down the streets. They hava a drum museum with object from all over the world; many of which you can tap. With some regret I respected their no cameras policy.

Today, to Yokohama Chinatown to enjoy the 2nd day of Chinese lunar new year celebration. If I last so long, i will try to get pics of the parade scheduled for early evening.